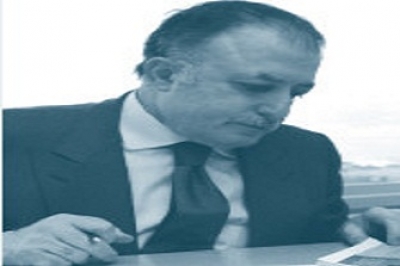 Ahmad did not know that Ibrahim Awwad Ibrahim Ali al-Badri al-Samarrai, who lived and pursued education in Baghdad, was all-powerful. He thought that the Islamic State of Iraq and Syria (ISIS) was a hot and dry sandstorm that would soon give way to a rainy season before the land tilts towards the sun of the spring, flowering in full bloom like Ishtar and toasting the ever-youthful nature of Adonis, so that Ahmad would revel in the pure rapture of Al-Akhtal’s poetry which flourished under Muawiyah’s era and Ziryab’s music in Al-Andalus.

Ahmad was mad at the Baathists of Syria and Iraq and blamed them for all the calamities that had befallen people. He even questioned the very existence of the Caliph Ibrahim, for he had never seen concrete evidence of him.

However, all his wrath and doubts subsided when he read that those who attended the NATO Summit in Wales decided to fight ISIS. Indeed, all 28 NATO countries have waged war against Caliph Ibrahim. Recalling the defeats of 1967 and 1973, the defeat of Iraq against Iran, the execution of Saddam Hussein and the havoc unfolding in Gaza, the memories suddenly stirred the emotions of Ahmad. He swelled with unusual pride at the thought that the Samarra-born Caliph is threatening the ‘free world’. He grew even more proud when he heard John Kerry say “It may take a year, it may take two years, may take three years, but we are determined it has to happen. The effort to destroy and degrade [ISIS] will take time and persistence”.

Fearing that the Sunni states might comply with the call of Barack Obama to ‘fight the Islamic State because that’s not what Islam is about’, Ahmad decided to hurry to the rescue of his Sunni from both their fellow Sunni and the Shia’a.  He stopped drinking alcohol, dedicated himself to prayers and pledged allegiance to Caliph Ibrahim. “Long live Caliph Ibrahim”, he shouted at the top of his lungs as he waved the black flag.